The best beach to bush excursion in Mozambique starts at the magical and wild Limpopo National Park. A conservation area that straddles two countries and offers some of the best game viewing in the world. You can explore both the bushveld and the Mozambique coastline, while enjoying a cultural experience second to none.

Imagine breath-taking natural scenery, sunsets you will never forget into the African wilderness and exciting off-road 4×4 driving? Add to this luxury game lodge accommodation and luxury beach villas, guided walking safaris, canoeing and bird watching and you have a Mozambique holiday so many tourists only dream about.

The Limpopo National Park (or Parque Nacional do Limpopo in Portuguese) was born when authorities changed the status of Coutada 16 Wildlife Utilisation Area in Gaza Province, Mozambique, from a hunting concession to a protected area. It forms part of the Great Limpopo Transfrontier Park with the Kruger National Park in South Africa and the Gonarezhou National Park in Zimbabwe.

Visit Limpopo National Park to discover its wide variety of biodiversity – see elephant, sable, roan, lion, giraffe, impala and even 49 different species of fish in the Massingir Dam. At last, three national parks have been linked thanks to the formal agreement between three governments in 2000, forming the Great Limpopo Trans-Frontier Park (GLTP) and Conservation Area. This partnership, and the agreed dropping of strategically selected sections of the border fence with Kruger, means that wildlife has been steadily moving back into Limpopo National Park.

Look out on your game drives for the Sable, elephant and buffalo, and explore some regions where humans rarely go – the wildest areas in Africa. Be aware that the summers are very hot with temperatures soaring to over 40° C but the winters are mild. The rainy season usually starts in January until about March.

Discover three countries in one, three conservation areas in one and  wilderness  holidays you will never forget – in Limpopo National Park. 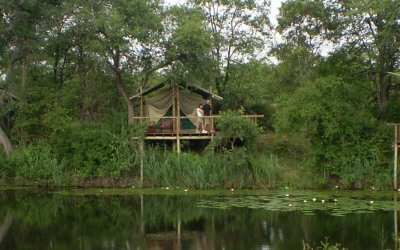 Elephants walk freely among the 5 tents at Machampane Camp perched on the banks of the Machampane River. Wake up early with the sun for your guided safari walk and can also enjoy a late afternoon walk to waterholes along the river.
Tell me more
view all packages